Merchandise has to be packaged securely prior to transportation. Signode in Dinslaken makes steel and plastic strips for this purpose.

The packaging tape shimmers like strands of tinsel that might decorate a ­Christmas tree the height of a ­skyscraper. The tape is made of steel, rolled flat and finely cut, with a wax finish. The festive atmosphere vanishes with a muffled thunderclap. The background is alive with hums, squeaks, and hisses.

“That’s the cutting machine,” explains Managing Director Rainer ­Kammer in the production hall of Signode System GmbH, a member of the Signode Industrial Group. He is the picture of calm as he says proudly, “We will soon be celebrating our sixtieth anniversary at this location.” Beside him is Barbara Dornbusch. She works in Sales Industry at thyssenkrupp Steel in Duisburg and has been responsible for Signode for six years.

The system manufacturer not only makes packaging materials such as strapping tape, seals, and stretch wrap, but also designs and produces equipment to apply these products. “Signode’s greatest asset is its expertise in the areas of material development and equipment construction,” says Dornbusch. The products are used in a multitude of industries, from automotive and pharmaceutical to wood, metal, furniture, and even graphic design. The main sales markets are in Eastern and Western Europe.
Steel holds steel

A truck rumbles up in the production shop. A cargo crane swings into action and sets to work unloading a coil; around 30 are unloaded here each week. “They arrive here fresh from Duisburg,” says Dornbusch. “Part of the material will be returned to us in a few days.” The reason for this is that the coils, which are delivered to Signode as starting material for steel packaging tape, are secured with Signode stripping. “In other words, we buy back the steel once it has been processed.” In addition, the used steel strips are recycled along with other steel scrap and reprocessed into coils yet again, a well-rounded process.

But Kammer does not stockpile large quantities. thyssenkrupp Steel sends as much material to Dinslaken 20 kilometers away as is needed for processing the following week. The proximity of the two locations is a major advantage, especially when things go wrong. In August 2015, Signode’s cold rolling mill broke down. “The rapid reaction time and the short distance to Duisburg saved us,” says Kammer. Without further ado, a thousand tons of cold-rolled strips were rolled in Bochum and slit to 388 millimeters at the Steel Service Center in Krefeld. “We ourselves would have had problems, had Signode been unable to deliver. After all, we need the tape for our coils,” says Dornbusch. This goes to show what good cooperation is made of: communication, commitment, and expertise.

This customer-supplier relationship is years in the making. Signode ­Germany moved from Hamburg to Dinslaken in 1958 to be closer to ­customers and suppliers. For the steel group it was an interesting concept, because now the two companies would become both supplier and customer. And this connection is still bearing fruit today. In the summer of 2015, ­thyssenkrupp delivered the 2.5-millionth ton of steel.

Steel as the binding element 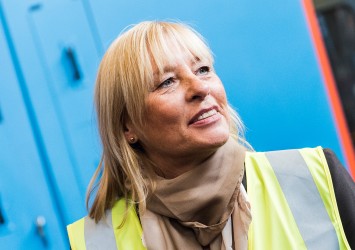