The second life of a former steelworks

A quarter of a century has passed since the first part of the Meiderich steelworks in Duisburg was given into public hands. And yet, the imposing backdrop of the former steel production dominates the local landscape even today – it’s just that its impression has changed. The decomissioned steelworks has become an internationally renowned local recreational area that stands like no other for the structural change of the Ruhr area.

A quarter of a century has passed since the first part of the Meiderich steelworks in Duisburg was given into public hands. And yet, the imposing backdrop of the former steel production dominates the local landscape even today – it’s just that its impression has changed. The decomissioned steelworks has become an internationally renowned local recreational area that stands like no other for the structural change of the Ruhr area.

This morning, there are mainly Nordic Walking fans are on the move. Steadily, they dig the tips of their poles into the gravel paths that run through the 180 hectares sized area. Entering through the entrance gates, they pass the gasometer, the blast furnace 5 and the sintering plant. In 82 years, 37 million tons of pig iron were produced at the Meiderich iron and steelworks. Today, it’s a place where athletes spend their free time.

It’s a piece of industrial history – made available for everyone to experience. For example, for a father and his son who climb the steps of blast furnace 5 together today. On top, a view from a height of 70 meters over Duisburg and the Ruhr area awaits them. On clear days like this one, visitors can even get a glance of the Lower Rhine.

The landscape park is characterized by its industrial character – a character that is consciously meant to be preserved, says Ralf Winkels, managing director of the park. "Some of it can even be perceived with the nose. In some places, you can smell the old oil and the hard work that was done here. That's something very special."

For 20 years, Ralf Winkels has been taking care of the many things that occur in and around the park. Over the years, he has witnessed the development like hardly anyone else. Even when it comes to the history of the park's origins, he knows the score.

Industrial monument as part of identity

"Selling the old industrial plants all over the Ruhr area would not have been the right thing to do because it would have deprived the area, the people here, of a piece of their identity," says Ralf Winkels. "There was also a large number of citizens who were committed to preserving the area as an industrial monument. Those responsible deliberately decided to convert the industrial site – the steel production became a landscape park.

The eventful history attracts visitors from all over the world. However, since the landscape park is open to everyone at all times, there are no exact figures. Each year, 1,700 groups take part in the official guided tours of the site alone – in total, between 32,000 and 35,000 individuals get to know the exciting history accompanied by a group leader. "There is always something to discover. You can touch analog technology without breaking anything," says Ralf Winkels.

At many spots, the past of the landscape park is self-evident, and yet, it seamlessly blends into the local recreation center. One example is the Gasometer. At the time of the Meiderich iron and steelworks, it contained up to 20,000 cubic meters of gas, which was used to drive the large gas engines in the power station.

Today, divers are able to explore the 13-meter-deep basin, which offers a few surprises to them: "You won't find such a large diving pool with parts of aircraft wrecks, a shipwreck and cars anywhere else in the world".

Right next door in the casting hall 2, the high rope climbing garden with the fitting name "Expedition Stahl" unfolds. In the past, this was the place where people used to “tap” to release pig iron every two hours. Today, the casting hall has made a new name for itself: "The climbing bunkers are among the most important facilities we have here, they are used by thousands and thousands all year round”.

Industrial culture from thyssenkrupp Steel at your fingertips

The wide range of leisure activities is complemented by a number of events, for which the landscape park provides a home with industrial charm. Ralf Winkels is proud of the fact that the diverse offers are so well received.

Together with his team, he works in a place that is characterized by modern lifestyle – and where historical industrial culture lives on all the same.

Once there were five huge blast furnaces in Meiderich - three are still preserved today. "Blast Furnace 5" is the only one that is freely accessible to visitors today.

At night, the blast furnace road looks like borrowed from a film Noir. And so Heino Ferch in the movie "Straight Shooter" logically chases through the gloomy paths of the landscape park.

In dry summers, rotor blades of the 40 meter high "wind energy tower" pump water to the park's bunker gardens. In addition, the Parkwahrzeichen enriches the Old Emscher with oxygen.

Since 2013, the four turbines of the former dual cooling plant have been producing different colors - and are one of the park's most popular photo opportunities.

Ralf Winkels has been managing the park's business for 20 years. During our visit, the expert showed us the best places to look over the picturesque landscape of the landscape park. 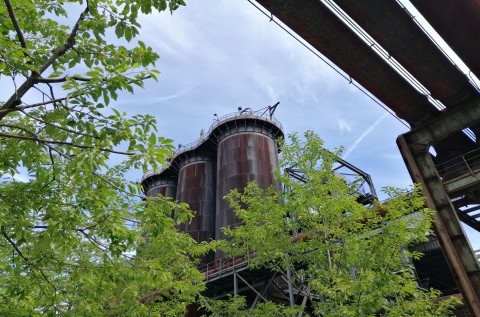 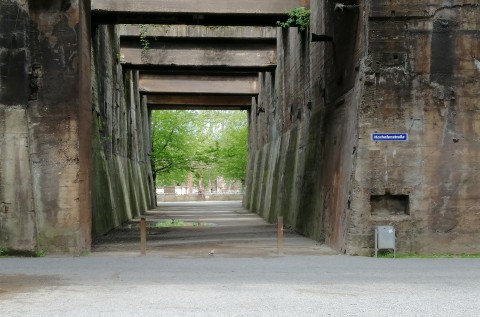 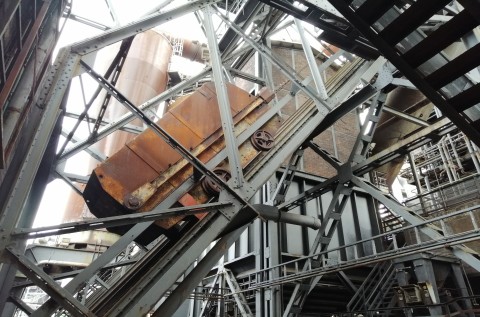 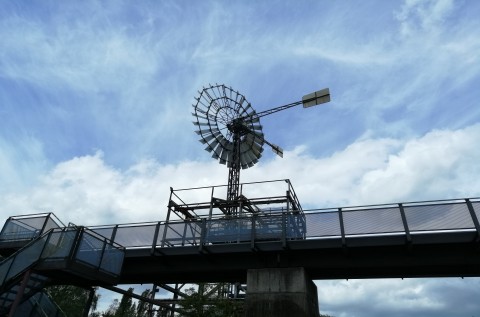 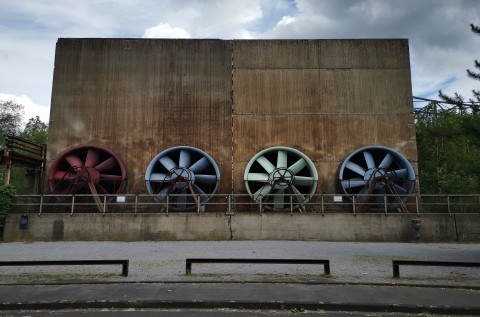 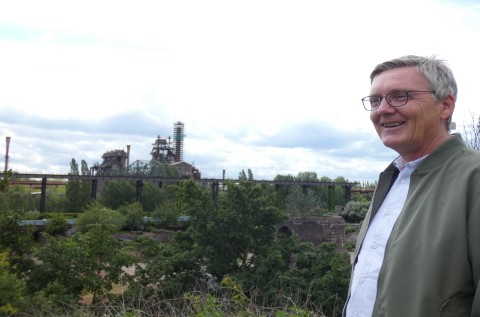