Swedish carmaker Volvo sent its new SUV XC40 on a journey to its roots in the thyssenkrupp steel mill – along with magazine Die Autozeitung.

A brand-new car parked right in front of the blast furnace is a rare sight indeed. Frankly speaking, it shouldn’t be there in the first place, but it sure makes for a spectacular shot! Inside the blast furnace, coke and iron ore are melting at temperatures of up to 2,000° Celsius to form the liquid gold of the Ruhr region: pig iron. Each day, more than 30,000 metric tons are produced at thyssenkrupp Steel in Duisburg alone.

Before the melting process is completed, the photographer directs the vehicle to the perfect spot in the steel mill. An important detail in the final picture is the tapping process in the background and how the red, glowing pig iron comes flowing out of the furnace. In the oxygen steel plant, the iron is then turned into steel, which, in turn, is the base material that makes up a major portion of the Volvo SUV on display here. And not only the Volvo: Steel, in its many varieties and shapes, forms the material backbone of the entire automotive industry. The question of whether and why this will remain so in the future was also raised by ‘Die Autozeitung’ magazine, which was producing an article on the new Volvo XC40 on the premises of thyssenkrupp Steel in Duisburg. They picked the ideal backdrop, since the business ties between the Duisburg-based steel group and the Swedish car brand go back several decades.

Thanks to this close relationship, the vehicle is allowed to go places that are normally strictly off limits to non-employees. “We basically supply Volvo with everything we have in our portfolio,” says Sebastian Deumlich, a member of the Volvo key account team at thyssenkrupp Steel. “From galvanized deep-drawn steels and bake-hardening steel through to micro-alloyed and multiphase steels. But the list also includes uncoated materials or materials coated with zinc-magnesium.” 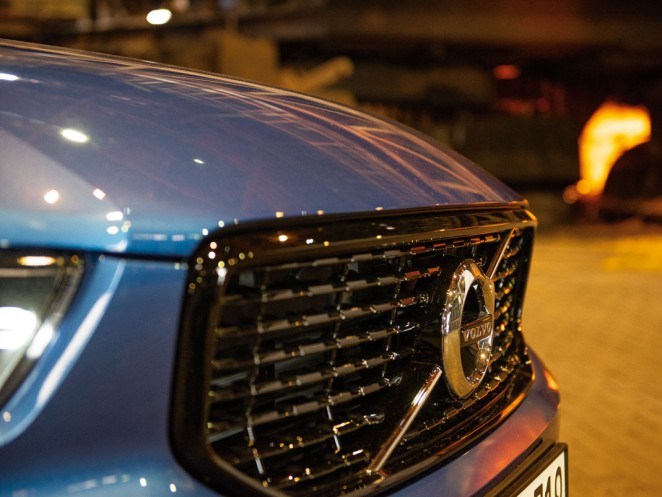 New Swede on the block: The XC40 is Volvo’s smallest and most compact SUV. 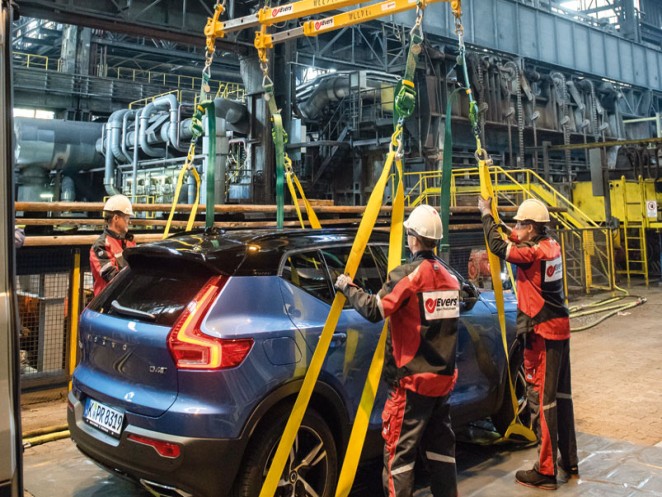 Hooked: Where coils averaging 25 tons are moved on a daily basis, a car of about 1.8 tons is practically a featherweight.

In the spotlight: Auto newspaper photographer Daniela Loof stages the XC40 for some beautiful shots (above). 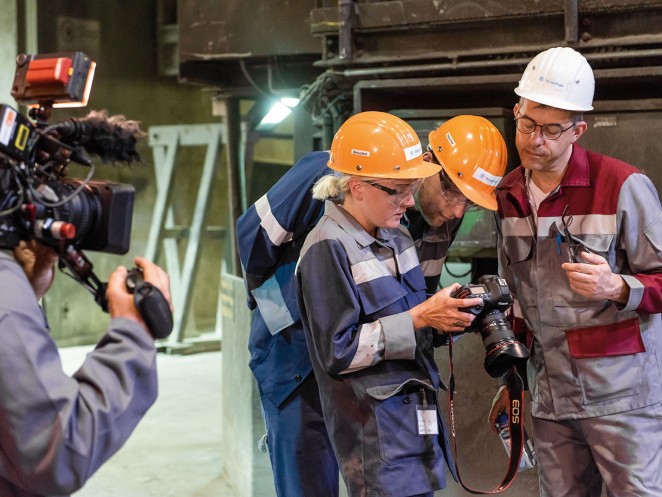 Together with author Markus Schönfeld and Mark Stagge (on the right, thyssenkrupp Steel), the auto newspaper photographer examines the motif and takes center stage herself. 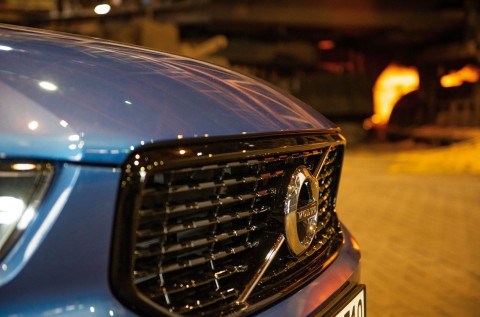 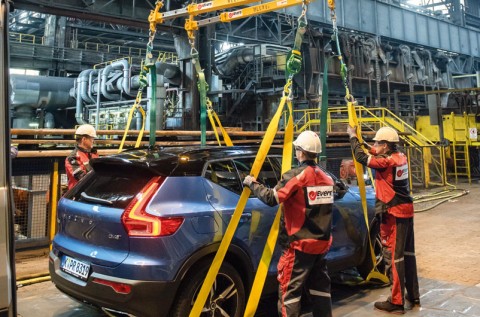 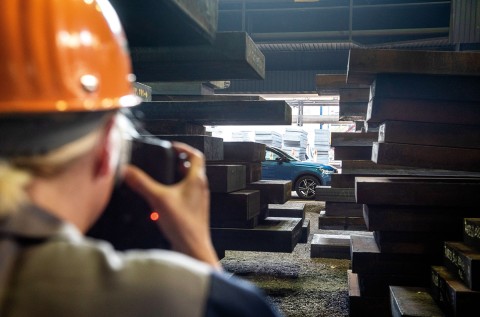 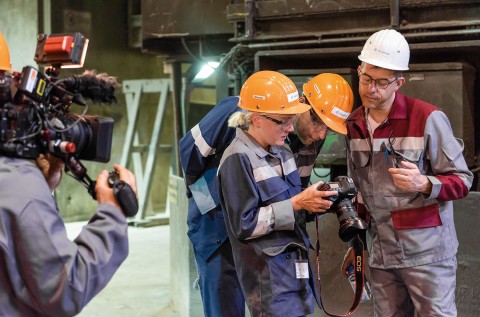 The blast furnace is suddenly very busy. A fresh batch of red-hot liquid iron is ready for further processing. Every four to six hours, a tapping takes place, which makes things extremely hot for the smelters at the furnace door. Directly at the outlet, temperatures can reach up to 800 degrees. Those who are not absolutely essential keep their distance.

The XC40 doesn’t seem to mind the temperature. Is it because the car senses the kinship shared with this place? Not very likely. And neither does it suspect that parts of it will return to this plant after it has served its term: In addition to iron ore and coke, pig iron also contains a large share of ‘old iron,’ i.e., steel scrap. During production, up to 30 percent of this is fed into the oxygen steel mill alone. It is used for cooling during the blowing process.

The reason for this is that before pig iron can become steel, it must be cleansed of unwanted by-products such as carbon, phosphorus, silicon, and sulfur. This is done in the converter by blowing in oxygen. As a result, the substances oxidize and then form so-called slag puddles on the surface of the liquid metal, which are then removed. The process generates an enormous amount of heat, which is reduced by adding steel scrap.

Next, the purified molten steel is formed and cut into solid steel blocks, called slabs, in the casting-rolling and continuous casting plants. As impressive and spectacular as steel production is, the true magic of producing the many grades and qualities happens much later in the production process, when the slabs are hot-rolled and cold-rolled into carbon steel flat products on the processing lines.

The more than 2,000 steel grades in thyssenkrupp’s range differ in their strength, elasticity, and corrosion resistance, in the way they can be deformed, which coating they receive, and much more. The full potential of steel can only be exploited when the knowledge of material properties is combined with manufacturing process know-how in just the right way. The core component that ensures the continuous development of the company’s steel portfolio is the in-house application technology center. It allows the steel maker to simulate and compare a wide variety of production techniques, check and optimize steel grades, or optimize products in close cooperation with and according to their customers’ requirements.

Duisburg’s high-tech materials are found both in the interior and exterior of the Volvo XC40, including the side panel, doors and dashboard, tailgate, covers, cowl, as well as cross and side members. “A colorful mix, although we are admittedly particularly proud of the parts used in the outer paneling,” says Deumlich. “These are the premium components in every car.”

Crash-relevant parts also play a very important role. “Volvo is renowned across the world for its high safety standards. It is therefore an honor for us whenever our materials find their way into a Volvo, either directly from us or via suppliers.” In the case of the XC40, these are first and foremost high-strength, hot-dip galvanized dual-phase (DP) steel and hot-formed, hot-dip aluminized steel. The DP steels are used, for example, in the cross and side members, while the hot-formed grades are built into the B-pillar.

The new Volvo XC40 is built on the Compact Modular Architecture, or CMA platform for short, and is the smallest SUV in the Swedish vehicle fleet. It is also the youngest generation in the Volvo family and has already been named Car of the Year 2018, even though it has been on the market for less than a year. The newcomer is so successful that the original production quantity has already been increased. “That’s good for us, too,” says a pleased Deumlich, “because it means that we will also be able to increase our delivery volume.”

Given Volvo’s high safety standards, we consider it an honor that our material is built into their models.

The material is wound into coils and shipped from the Duisburg steel mill to the rest of the world, including the Swedish production sites in Gothenburg and Olofström. A few production steps later, the individual components are assembled in Ghent, Belgium, where they roll off the assembly line as the Volvo XC40. It is a long way before iron ore is turned into high-quality steel grades, such as those produced by thyssenkrupp Steel. That’s also what the ‘Autozeitung’ team takes home after having spent a day driving nearly 50 kilometers across the approximately 9.8-square-kilometer factory site in Duisburg to gather information for their article. The whole process involves many production steps and a high degree of expert knowledge.

And something else, too, becomes clear on this day: Steel, even though it was invented thousands of years ago, is and will remain one of the most versatile and modern materials of our time, thanks to properties such as low cost, ease of processing, light weight, high crash safety, and the fact that steel is nearly 100 percent recyclable.

"We are very proud to receive the award because it proves that we supply our customers with first-class products and reliable service", says Mechthild Milz, reponsible Key Account Manager at thyssenkrupp Steel. "However, this only works if we are self-critical and continuously monitor ourselves. We regularly ask ourselves where we can optimize our processes and further improve our service."

The VQE is awarded to suppliers with outstanding performance. The criteria comprise, among other things, product quality, delivery reliability and continual improvement. thyssenkrupp Steel supplies everything its portfolio has to offer to Volvo Car Corporation, from galvanized deep-drawing steel, through bake-hardening steel down to microalloyed and multi-phase steels. "We have a business relationship with Volvo that goes back decades", says Milz. "We supply the Swedish location in Gothenburg and Olofström, and - since 2018 - also the new production site of Volvo Cars in South Carolina/USA."