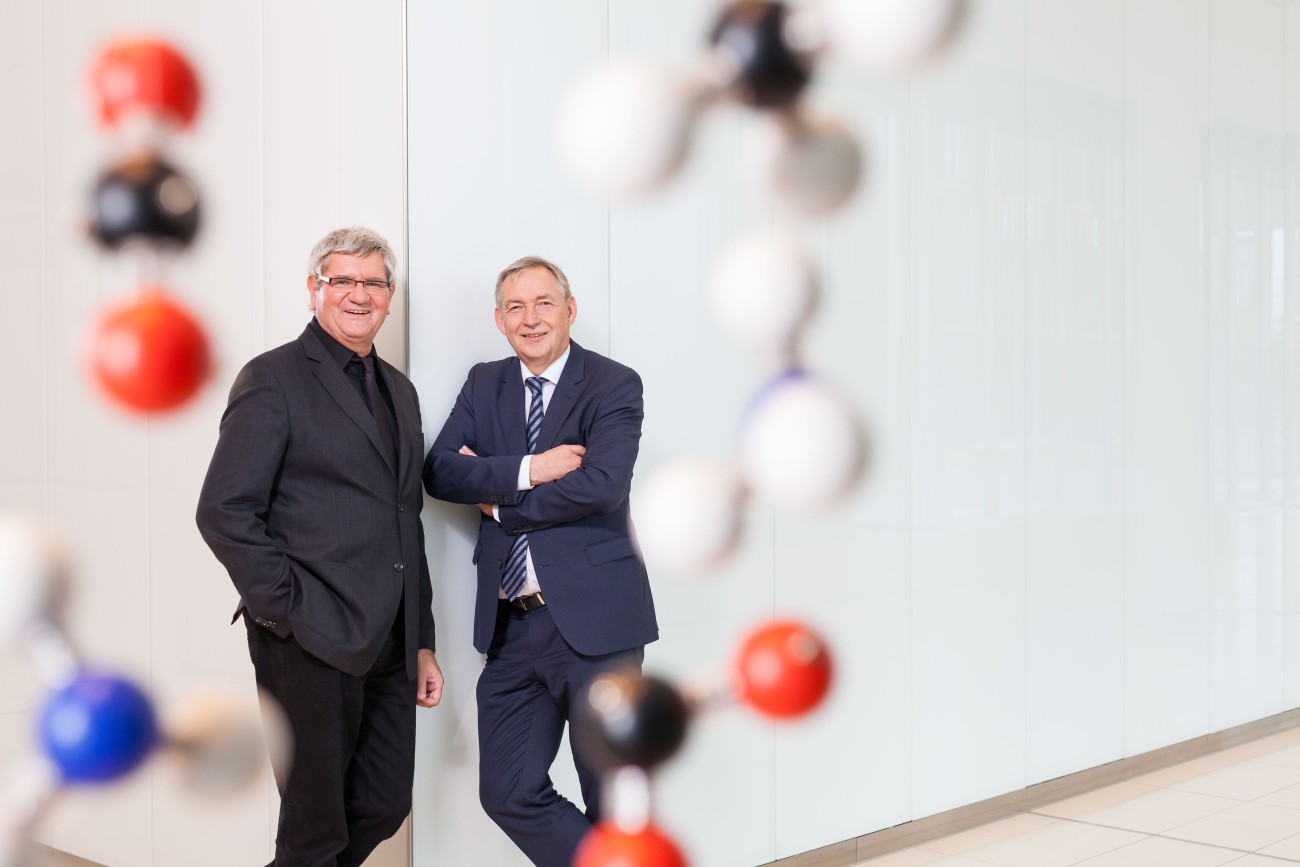 The plans made by Robert Schlögl (l.), Director of the Max Planck Institute for Chemical Energy Conversion, and Reinhold Achatz, Head of Technology at thyssenkrupp, call for implementing the energy transition with Carbon2Chem®.

What is the Carbon2Chem® project about?

Achatz: The long-term goal is to use the gases from the steelmaking process as a raw material for producing chemicals such as ammonia and methanol, instead of using the gases in power plants to generate electricity. This way, we can sustainably reduce our CO2 emissions. Renewable energies can then be used to generate the additional hydrogen that we would need for this. Carbon2Chem® converts the carbon from the steel mill gases into energy, rather than releasing it as CO2 into the atmosphere.

Schlögl: This is a completely new approach. As a rule we try to reduce CO2 emissions by lowering the amount created. However, this is no longer possible in steelmaking. In Germany, we’re already working with the lowest amount of carbon possible. The situation is similar in other industries, such as glass and cement manufacturing and limestone calcination, as well. Carbon is also indispensable here, so there’ll always be a significant quantity of CO2 sources.

Can Carbon2Chem® be adapted for use in other areas?

Schlögl: Sure. That was our plan from the very beginning. It would have been very shortsighted of us to have limited it to one application, especially with the tremendous amount of research that is necessary. We’re developing a kit with which you can create modules to implement the energy transition. That’s our goal. And thyssenkrupp is really a pioneer here in its efforts as the first business to cooperate with scientists.

Achatz: This presents an opportunity for all 17 project partners who are involved in the Carbon2Chem® project. We’re not looking at a single answer. Ultimately it should be possible to mix and match all technology modules. The initial application in steelmaking can definitely be used in other variations several hundred times over – such as in the cement industry, an area in which thyssenkrupp is also involved.

We need to store the energy generated by renewable sources if we want to use it, too.

Let’s address renewable energies. How do you plan to use them?

Achatz: All technologies that are developed as part of the Carbon2Chem® project will be required in implementing the energy transition. If we want to use all the renewable energy generated, we need to be able to store it or increase the flexibility of consumers. Because you can’t decide or make long-term predictions about when the wind will blow or the sun will shine.

Schlögl: And we need a solution for this, too. It’s only one of many building blocks. We need to take a systematic approach and consider all options through to the end to see what consequences the results will have for the next building block. Many of the ideas are far from new, but we’re trying them for the first time and seeing whether they work in unison. It doesn’t help if we reduce harmful emissions at one point only to emit them elsewhere. Or worse yet, produce new ones.

Achatz: That’s why we want to use Carbon2Chem® to recycle carbon from the steelmaking process rather than releasing it into the atmosphere.

Achatz: Exactly. It is one of the many building blocks in the Carbon2Chem® solution. The main problem with renewable energies is not the amount of energy, but rather the way it is distributed over time, which is not in line with consumption.

Schlögl: We don’t have a surplus of energy right now because the grid simply cannot store the surplus. At present, if more solar or wind power is generated than consumed, some of the solar panels or wind turbines are simply switched off.

Then you don’t necessarily need a surplus of energy to generate the required quantity of hydrogen?

Schlögl: No, you can build wind farms and solar power plants that generate energy solely for this purpose. But at the moment we’re not pursuing that avenue for economic reasons. It’s relatively difficult to set up the necessary systemic processes in the areas where we could build the relevant power plants.

So how are things looking now?

Achatz: We had the groundbreaking ceremony for our Duisburg technology center on 2 November. Together with our partners, we will work with real steel mill gases on the periphery of the mill within a year’s time. The teams will spend anywhere between a few weeks to several months there. Otherwise, our partners will be researching at their respective companies.

Schlögl: Carbon2Chem® can be divided up into several sub-areas. We have of course defined these as interim goals, which is an essential aspect of long-term projects. It puts us in the position to adapt to changes in the world as necessary.

Achatz: We at thyssenkrupp need to keep moving in this direction and remain agile in all of our developments. It’s the only way to reposition ourselves as it becomes necessary.

Half of the problems in the energy equation can be resolved by reductions, but we still need solutions for the other half

What benefits does this project hold for thyssenkrupp AG and, more specifically, the Steel division?

Achatz: We need to create the basic conditions to keep steel production in Germany. The challenges lie in our competition, such as China and the E.U. climate targets. We need to find a way to produce steel in Europe efficiently without emitting high levels of CO2.

Schlögl: Low CO2 emissions are the key. We’re recycling the carbon and offering it as chemicals for further processing. These chemicals can also be used by other companies for their purposes, so they don’t need to use carbon to produce them themselves.

Achatz: And there’s more. We want to use the Carbon2Chem® technologies for other areas, too, by opening them up to a global market through our Industrial Solutions Business Area. Selling these systems will allow many other companies to save CO2 and use the methods to recycle carbon. We hope that the multiplier effect will be substantial.

You mean that thyssenkrupp will partner with the chemical and energy industry?

Achatz: We already are, but it will strengthen the partnership. We have been building a lot of the chemical and power plants in Germany, as well as the rest of the world, for some time. We are already pumping energy and heat back into the grid, even if it’s only regionally. There are plans in place to increase these efforts. We are definitely supporting the energy transition.

Schlögl: Consider it for a minute. Who else is in a position to tackle and implement the energy transition, if not industry? As scientists, we can deliver the tools, but only industry can restore order to the global carbon cycle.

Achatz: Sustainability has long been an important goal for thyssenkrupp – in terms of being economical, environmentally friendly, and socially responsible. Of course, there are harmful technologies, but there are also technologies that help us. With Carbon2Chem® we are clearly focusing on the latter. And it’s not enough to just have one technology. We need the combination of several different technologies working in unison. There’s no other way of approaching the energy transition than viewing it as a whole, so that a solution can be found.

Is it at all possible?

Achatz: It has to be. Not just for us in industry, but also for society. We’ve taken a two-track approach at thyssenkrupp for this very reason. On the one hand, we have the Global Energy Efficiency Program (GEEP), which was developed to reduce harmful emissions. On the other hand, we have projects such as Carbon2Chem®, with which we can take the first steps toward recycling carbon. That’s not a contradiction because as we said we cannot solve the issue with just one method.

Schlögl: In general, you can say that half of the problems in the energy equation can be resolved by implementing savings measures, but we still need solutions for the other half. That’s already posing huge challenges for us to tackle in the next ten years.

partners from industry, business, and research are working on implementing and funding the Carbon2Chem®project. The German Ministry for Education and Research is providing €60 million in funding for the project.