When Toni Eggert is racing down the icy track at speeds of up to 140 kilometers per hour, he has to know he can trust his partners. This includes his teammate Sascha Benecken and thyssenkrupp, who provides development support.

Toni, how did you come to team up with thyssenkrupp in building your two-man luge?

Toni Eggert: Herbert Schneevoigt is the person who originally brought us together. He was also part of the team that helped set up the thyssenkrupp plant in Ilsenburg. Unfortunately, this year he passed away. I knew him quite well. My grandfather and Mr. Schneevoigt actually competed together in doubles luge when they were young. He was also the one who introduced me to the crew at Components Technology in Essen and Alex Meier at the TecCenter for Drive Technology in Liechtenstein. That was back in the summer of 2014.

What are the key aspects of the collaboration?

Eggert: We were able to draw on the full range of expertise thyssenkrupp has in technology, materials, and processes. This allowed me to find the perfect steel to use for our sled’s blades. When I know exactly what the blades should look like and what they should offer in terms of performance. Having many years of experience gives me the knowledge necessary to know what type of material I need to make them.

What is the most important property when it comes to the steel?

Eggert: The frictional resistance should be as low as possible. That is absolutely key in competition. As little resistance as possible allows you to achieve the highest possible speeds.

thyssenkrupp produces the best steel for the blades on our luge.

Why did you ultimately opt to go with heavy-plate steel from thyssenkrupp?

Eggert: Along with its low resistance, the other main advantage of the material is that I can work with it without having any other steps involved. That means I don’t have to subsequently harden and temper it, or apply a surface coating. Other steels that were up for consideration are generally coated. There is real disadvantage to this, in that it is often not possible to bend it, make holes in it, or treat it in any other way after the fact. If I were to do that, the coating would peel off, thus rendering the material useless.

Michael Linnepe: Have you ever encountered any problems with surface defects?

Since we are biased in this case, we will not mention the material you are using...

Eggert: No, please do! I will just say this: The steel is highly resilient and sturdy, and it is incredibly easy to work with. To illustrate: If we happen to run over a small pebble, this does not cause cratering in the steel. All of these properties, in combination with the low frictional resistance, make the steel from thyssenkrupp the perfect material for the job.

Once the steel is scanned, we can then optimize it in the future.

Mr. Linnepe: In what other ways is the Steel division able to offer support?

Linnepe: The most minor of modifications made to the steel blades are what ultimately make the difference. To gain an edge in competition, we used a tool to measure and scan the geometry of the current blades millimeter by millimeter. In theory, it would be possible to use this data to further optimize them in the future.

You say in theory. Why aren’t you doing this?

Linnepe: We would need a special tool to do that. It’s called a 5-axis milling machine. With it you can enter the CAD data gathered from the measurements and produce the blades to your precise specifications. And that’s not all. The 3D model allows you to not only create exact copies of the blades, but also to further optimize them as well. A machine like this does come at a cost though – and we don’t have that kind of money lying around. But it would be the next logical step. The milling tool, together with Toni’s experience, would allow us to be prepared for any weather or track conditions at the particular course and create the right blades based on these conditions.

Eggert: That would be amazing. Under ideal circumstances, I’d enter my personal reference values, and the rest of the parameters would automatically be adjusted to match them. At the end I’d have a finished CAD model ready to be milled. That would save me at least two months’ work. I’ve being doing this all by hand up to now.

It really takes you that long to produce a new blade?

Eggert: Yeah, that would be the bare minimum. And once the part has been milled, I then need to bend and adjust it. The blade is next fixed onto the runner using putty and the groove ground into it. This takes roughly two months. Only then am I able to start initial testing on the track. Over the weeks to follow I experiment and try to find the best setup. This could mean sharpening or rounding the blade, depending on the track conditions. In reality, they’re never really finished.

Where and when do you test them?

Eggert: We train and travel with the German national team for four to five weeks during the winter. In the time leading up to the World Cup, we do five practice runs. This allows us to make adjustments to the sled to adapt to the conditions on the course.

Is it any advantage for you in knowing the tracks from past races?

Eggert: No, not really. It may sound like a cliché, but every race is different. First off, temperature is a key factor. At -15 °C, you will need a completely different edge than you would at 10 °C. And even though the ice is artificially chilled, the surface is softer at that temperature than it would be if it were below freezing. When the race is held also plays a role. At the end of a season, the ice on the track is much thicker than at the beginning. The crew maintaining the course sprays water on it to increase the thickness of the ice and decrease the radius of the turns.

Toni, when did you first become involved in the sport?

Eggert: I was 11 at the time. My father and grandfather were both involved in the sport. Back in 1988, the year I was born, my dad was on the Olympic team, but had to pull out due to an injury. Later on, when I was a kid, we would always watch the races together. I would see the trophies at home, and one day, I wanted to give it a try myself.

How much longer do you want to compete?

Eggert: I want to retire after the 2022 Olympics in Beijing, if I’m able to qualify. My original plan had been to leave the sport after the Games next year, but things are going so well at the moment. 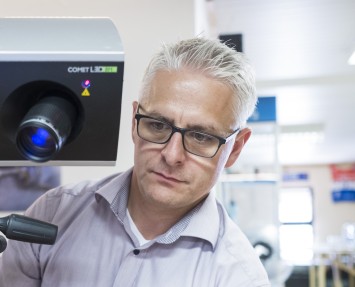