thyssenkrupp Steel has launched a unique photo project: It’s arranged for all of its locations and their numerous systems to be photographed from above.

Selfies are passé; ‘drofies’ are the latest thing now, as demonstrated here by Rainer Kaysers, Nils Röscher, and Volker Erken (from left to right).

This process doesn’t require going to the same extremes as Alexander Gerst did – that is, rocketing up into the sky and looking down on our plant from a height of 400 kilometers. Anyone who’s ever looked out of the window of an airplane mid-flight knows how different the world looks from that angle – and they’re familiar with that very special feeling that arises when you observe the Earth from high above.

Continuously changing your perspective throughout your life is a wonderful way to gain a deep understanding of it. Drones present a unique opportunity as far as this is concerned; they can be used to observe the world in which we live in spectacular, never-before-seen ways. They step in for photographers to reach previously unscalable heights, making it possible to take photos from an unusual proximity or distance, depending on the viewing angle. These images allow you to enjoy a totally fresh look at your everyday surroundings.

“I’ve been taking photos for thyssenkrupp for 35 years, so I know virtually every nook and cranny from every angle, and I’ve seen it all through virtually every camera setting,” says Rainer Kaysers, who works for the company as – you guessed it– a photographer. He saw some entirely new things, though, when he began taking aerial photographs last year.

An unusual perspective backed by an artistic approach

The idea behind this project came from thyssenkrupp Steel Brand & Marketing Manager Volker Erken, who commissioned Kaysers and freelance photographer Nils Röscher to put it into action, granting them full artistic freedom in the process. “Our only criterion was to find subjects that were as graphical as possible, such as ones with lots of lines and parallels,” says Erken. “During production, additional interesting geometries came into play, such as the round sand and coconut mounds that taper at the top,” adds Röscher.

Seen from a lofty height, even the tallest structures look like toy buildings. From a bird’s-eye view, forms and structures take on a captivating new appeal. Figuring out how to photograph old familiar subjects from above instead of at ground level represented a welcome challenge for the photographers and got their creative juices flowing.

Once they got started, they eagerly kept hunting for more incredible photo opportunities. “It’s unbelievable how different the places that you know so well can look when you observe them from a height of 100 meters,” says Kaysers. “You can’t anticipate that at all from the ground.” The photos were taken in late summer 2018 within a space of around ten weeks – at all times of day, depending on the respective sun, wind, and weather conditions. “The weather was great last summer, which naturally helped us out with this project,” says Kaysers. “We often decided to photograph subjects spontaneously since the conditions were suitable at that given moment.”

Moving around and discovering new things

However, the drones didn’t necessarily do what the photographers wanted them to at all times. “We took pictures using a GPS-controlled model. The compass in it was sensitive to external influences such as metals,” says Röscher. “Steel plants typically contain a fair amount of metal, so we continuously had to change our position until the drone actually took off.”

The drone hasn’t photographed all of thyssenkrupp Steel locations yet. It will continue to fly around and take photos capturing the unexpected beauty of steel production over the course of the year. After all, taking a fresh look at steel production is worthwhile – see for yourself.

thyssenkrupp Steel from above 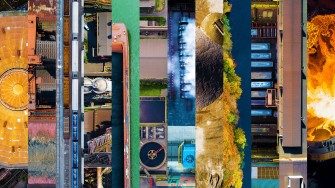 New every month – fascinating drone images of our sites