The Carbon2Chem® initiative aims to prove that carbon dioxide can be used as a raw material. Practical research is starting at a unique technology center at the thyssenkrupp Steel location in Duisburg.

Imagine if you could not only permanently reduce carbon dioxide emissions, but also make economic use of the carbon and oxygen contained within them. Does that sound unrealistic to you? It doesn’t to thyssenkrupp. The company has joined forces with 16 other partners from the fields of industry and science, such as Siemens, Evonik, Linde, and the Fraunhofer Institute, to launch a large-scale research project: Carbon2Chem® converts metallurgical gases released during the steel production process into basic chemical components, which not only supports the economy, but can also improve the environmental impact of the steel industry.

To conduct the accompanying reality check, the thyssenkrupp Steel production location in Duisburg built a technology center. It is directly connected to the metallurgical gas pipelines of the integrated steel mill. Researchers inside the center have been combining basic scientific research with industrial expertise since April 2018. The first products are expected to arrive in September. Purifying metallurgical gases lies as the heart of Carbon2Chem®. This task is carried out by Linde AG, one of the world’s leading firms in the field of plant engineering, as well as the plant specialists at thyssenkrupp Industrial Solutions.

Normally, the majority of the metallurgical gases from the steel plant, coking plant, and blast furnace are burned to generate energy, then released into the atmosphere, with increased impact on the environment. Carbon2Chem® converts these gases into chemical products. The carbon dioxide contained in the gases in particular is used as a crude material.

The basic chemicals that are created are then further processed. The technology center will start by producing methanol and ammonia. Methanol is contained in some cleaning products and can also be used as a fuel. Ammonia is further processed into substances such as urea, which is processed in turn in the production of mineral fertilizer.

Carbon2Chem® could contribute to reducing dependency on petroleum. We reuse the carbon that we inject into the blast furnace several times. This uses up fewer scarce fuel resources. Also, the chemical products that we produce are far more environmentally friendly than the ones made in the past. Scientist Dr. Wiebke Lüke, Carbon2Chem® Project Leader at thyssenkrupp AG, says: “For example, we can also manufacture oxymethylene ether. This is a diesel substitute that burns with less soot than conventional diesel does. However, switching to CO2 only makes sense if the lifecycle analysis shows that this option is less expensive on the whole. That factor always needs to be taken into account.”

Gas scrubbing represents a true challenge for the research project. “This lies at the heart of the Carbon2Chem® initiative,” says Dr. Andreas Frey, a development and process engineer at Linde. The metallurgical gases contain not only the hydrogen (H2), nitrogen (NH2), carbon monoxide (CO), and CO2 that we need for our chemical synthesis, but also a large amount of other components that damage highly sensitive catalyzers. Moreover, there are three different types of metallurgical gases: converter, blast furnace, and coke oven gas. “If we don’t manage to purify metallurgical gases to such an extent that we get a pure synthesis gas at the end of the process, then the concept behind Carbon2Chem® will have failed.”

In order to make use of the accrued carbon dioxide at the steel mill, more hydrogen than is required then can be extracted from metallurgical gases. There’s a solution for this, too. Lüke explains: “That’s why we generate additional H2 using the water electrolysis process developed by the thyssenkrupp Uhde Chlorine Engineers. This involves splitting water into hydrogen and oxygen using electricity. We use renewable energies to carry out water electrolysis.”

Exterior view of the gas scrubbing system. It lies at the core of the technology center.

The pilot plant is located in Duisburg and is clad with facades made of pladur®.

Water electrolysis is used in the plant to produce the additional hydrogen required for chemical syntheses.

This is necessary because more hydrogen is required to utilize the accrued CO2 than can be extracted from metallurgical gases.

Inside the adsorption system, highly purified hydrogen is extracted from the coke oven gas.

Inspecting the construction site: Andreas Frey and Wiebke Lüke check the gas supply lines in one of six lab rooms. 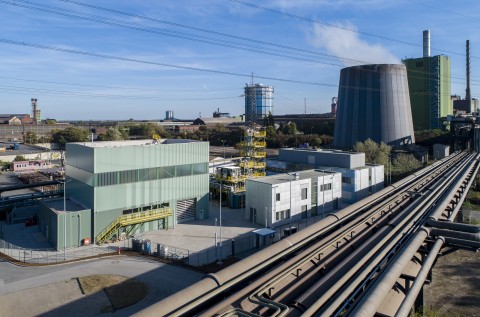 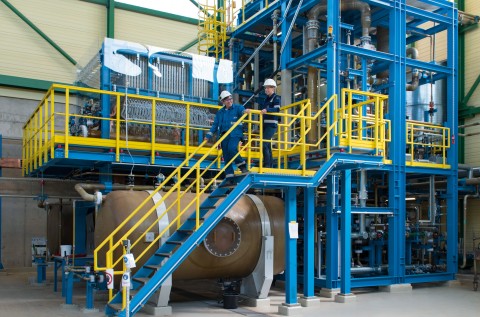 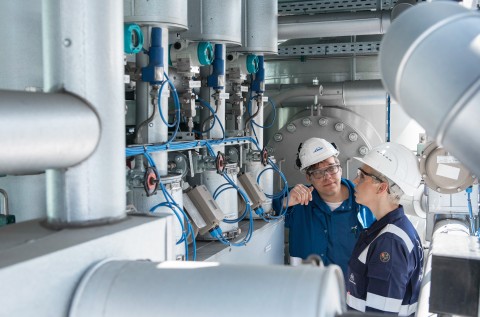 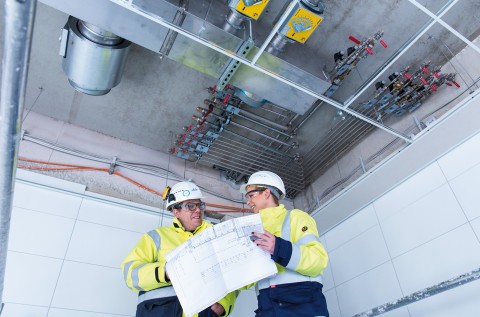 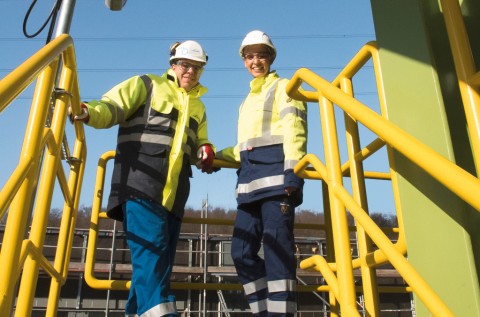 If the Carbon2Chem® project succeeds, it could change the image of carbon dioxide: CO2 will no longer be seen as harmful carbon emissions, which contribute to global warming and climate change, but rather, as a raw material. Moreover, Carbon2Chem® has the potential to become a key technology for global climate protection. It can be used in steel production as well as in other emissions-intensive branches of industry, not just those handling metals, thus reducing air pollution in those regions.

Adsorption? Absorption? Does it really make a difference? It most certainly does!
Only when metallurgical gases are purified can CO2 be used as raw material. We are testing that process in our Carbon2Chem project. 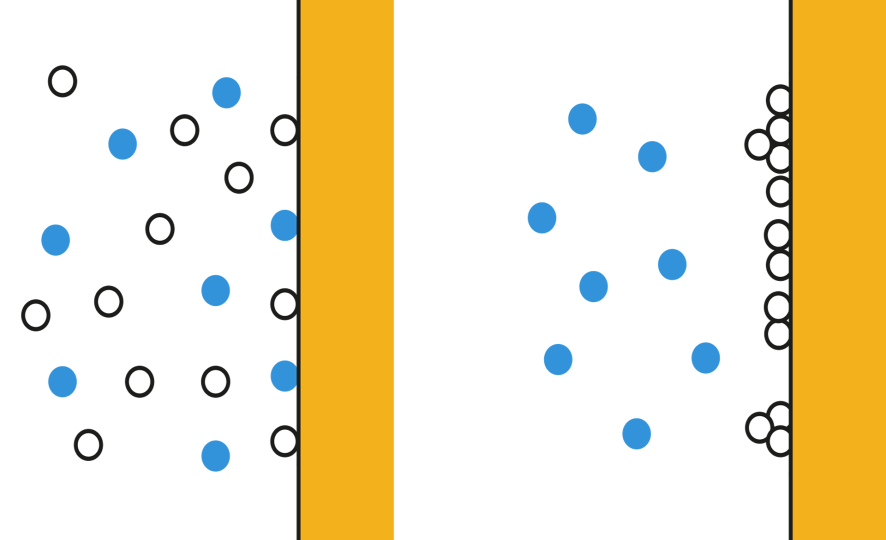 “Climate-neutral CO2? Carbon2Chem will prove that it can be done.”

“We want to use our large-scale research project, Carbon2Chem®, to prove that CO2 can be considered a raw material. A technology center has been specially built at thyssenkrupp Steel’s factory site in Duisburg to trial a first pilot system together with partners from the fields of industry and science. We use the exhaust fumes released during steel production and convert them into basic chemical components. Initially, we want to use the carbon dioxide from steel mill gases to manufacture chemical products such as methanol and ammonia. These chemicals act as the base product for processing into fertilizers, plastics, and synthetic fuels.” 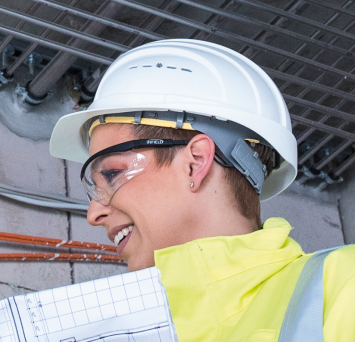 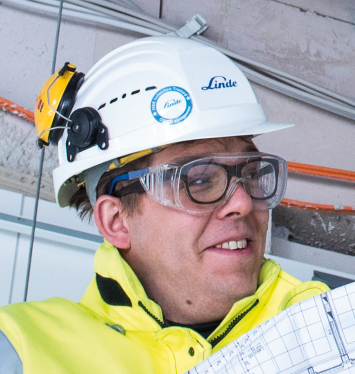 ...is the amount of CO2 in the air. Since it absorbs and re-emits some of the heat released from the Earth into space, it plays a decisive role in influencing the planet’s climate.

...as well as numerous related emissions-intensive branches of industry worldwide can use Carbon2Chem® technology and thereby make a significant contribution to climate protection.

...is how long it will take, according to experts’ estimates, until the Carbon2Chem® technology can be applied in industrial practice.

...from the fields of industry, business, and science joined forces for the project, under the leadership of thyssenkrupp.